The Testimony of Sheriff Lewis Brown

"The Dundersford widow came to me with a story so absurd, that it sounded like it came right out of one of those silly old tales by them Grimm brothers. As a matter of fact, I remember telling the old bird to sell off those last few cows and go into the business of writing scary stories for the local tots!
Well, Mrs. Dundersford said that that lunatic up on the hill, Frankenstein, was up to no good. She called him “Doctor” and said that he was up there playing with dead folks and parts of dead folks. She said he was making the dead come to life!
So I says to myself, Frankenstein may be a lunatic, but he ain’t no doctor. If he’s got cadaver’s up there, he didn’t get ‘em legally. The widow probably just saw the nut playing with some store mannequins or something. Who knows what that weirdo is into, but I told her I’d go up to check it out, anyways.
So of course, it was dark and stormy as I headed up to question Frankenstein. I arrived at his door, soaked to the bone, and slammed the giant knocker three times. There was more lightning than I’d ever seen. Finally the door creaked open and Frankenstein peeked out. "Let me in, you fool!" I tried to shout through chattering teeth. I showed my badge and he reluctantly pulled the door open.
I told him what the Dundersford widow had reported to me. Frankenstein looked shocked at first. Then his mouth curled into a frenzied toothy grin. “That crazy old bat,” he laughed. “she’s got it all wrong! None of them have come to life...yet. But, tonight”, he laughed some more. “TONIGHT IS THE NIGHT!”
Frankenstein grabbed my arm and pulled me towards the stairs. “Come up, Come up!” he shouted. “Witness the miracle! Witness my genius!” We entered an upstairs bedroom. It was disgusting. The room was covered with blood and gristle and flies. A vaguely human shaped monstrosity laid across the bed. Body parts were not so skillfully sewn together like some sort of puzzle from hell. Wind and rain blew in from the open window above the bed. A long and twisted metal wire wound in through the window and wrapped around one of the bed posts.
Well, the next few minutes were kind of a blur. I remember a flash of lightning and a static crackle across the bed. Then the thing starts to move! It sits up and looks at me.
"Daddy?" it says.
I was down those stairs and out the door in a flash. I ran down the hill and I turned to see if the thing was following. It was almost right on top of me! It reached for me with it's decaying yellow-green hands when, suddenly, it was attacked from the side by the biggest derned wolf I've ever seen. I stared in shock for a moment, then turned and ran home. I heard howling all night long.
I couldn't believe it. I'd been saved by one of those good-fer-nuthin, pain-in-my-ear wolves!"
.- Lewis Brown (May 12, 1954)
One month later, under a full moon, Sheriff Brown was killed by a werewolf/Frankenstein monster hybrid.
the end R is for Roach 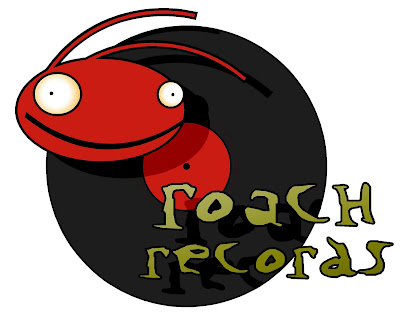 Happy To Be A Monkey 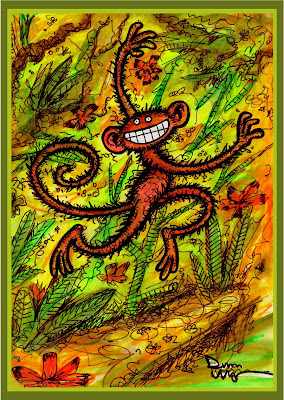 And it was clear for all to see
Just how happy to be a monkey was he
.
This is a style test for a kid's book that I'm working on. Any comments, suggestions, or critiques regarding the artwork and/or the text will be appreciated.
3 comments:

Q is for Quail

I love the outdoors...for six to eight months a year. Wisconsin winters are awful. The cold, the snow and ice, and the layers and layers of clothing...I'm about to lose it! Hurry, spring!!!!!


Thanks, Gina, for the Quail Camouflage suggestion! 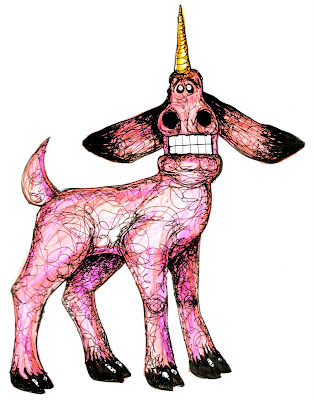 The unicorn is the most majestic and beautiful creature in all the kingdom.
No comments:

The Pudding Man has watched over this blog for several months. His primary functions were to greet visitors, stare, and prevent any ugly unicorns from being posted. I think the unicorn threat has been neutralized. It is time for the Pudding Man to step down from his post. The Pudding Man reigns no more! I fear no ugly unicorns! Plus, I like my new banner. I also updated my portfolio: http://denverwagner.com/.
So, I respectfully send off the Pudding Man banner...I still love you, but your fonts are kind of...terrible.

I really, really hope no ugly unicorns show up here...especially not on Monday, January 25th, 2010.
4 comments: 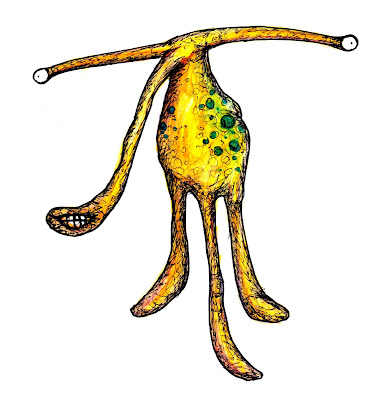 The coastal mucksucker lives on the coast and sucks muck. It aspires to one day pack sand. 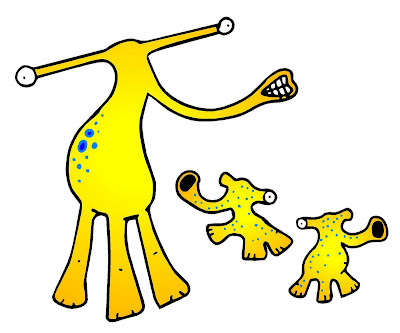 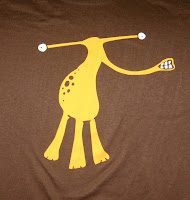 ...or as a certain singer I know put it, "What's that giraffe-thing
on your shirt?"
2 comments:

F is for Firefly

If it can be brewed, you'll find it at the Firefly! Your one-stop shop for beer, coffee, and trouble. 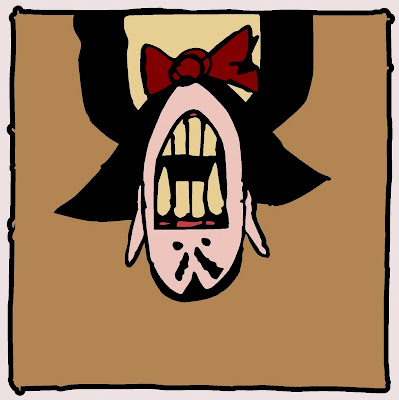 C is for Chimpanzee 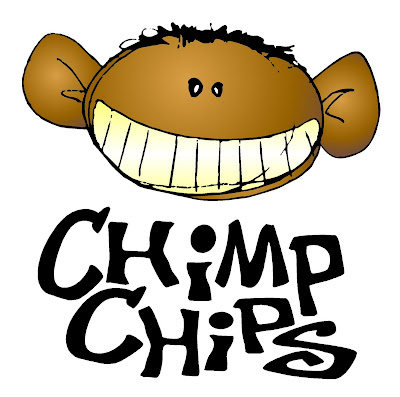 Trust me, you don't want to know what they're made of.
While I play around with this silly little blog, guys like this exist: Pascal Campion. Holy Moley! I don't know if I should be inspired or give up!
No comments: I listen to a ton of podcasts. I have links for some of my favorite art related podcasts in the column to the right under "cool places". Art & Story, Escape from Illustration Island, Ninja Mountain, and Big Illustration Party Time are all great. I'm thankful for all the time and effort the hosts put into these shows. They are entertaining, informative, and inspiring and make the day job go a little faster and feel more productive.

Chris Oatley's Artcast is really great. He has a down-to-earth personality, and an inclusive, genuinely positive attitude. He is building a community of like-minded people through his blog, podcast, and other networking sites. About a month ago, he posted his first assignment.

The assignment consisted of designing a character that combined classic literature with horror. I had a lot of fun playing around with the concept, (I was close to settling on a vampire/Piggy from Lord of the Flies) when the combo of Gillman/Huckleberry Finn crossed my mind. Get it?It's an obvious pun, and I won't be surprised if other Huck Finns show up. (I am excited to see the rest of the submissions!) I wanted my design to have the look and feel of a classic 1950's era Looney Toon, which I think are some of the funniest cartoons of all time.

Part of the assignment was to call the listener line and leave a message about the piece, which I did. Dorkily. Oh well.
No comments:

E is for Echidna 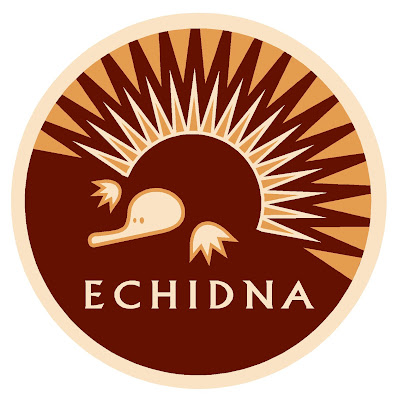 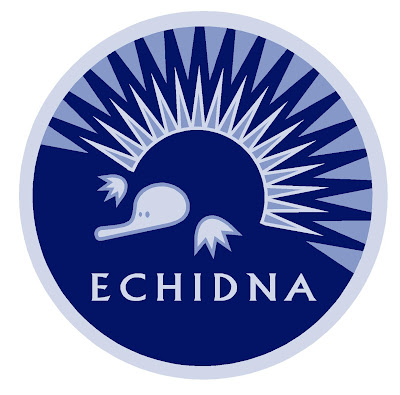 Echidna Investment Group...Helping you build your nest egg.
What do you think, brown or blue?
I received some great suggestions for animal logos. Thanks, Kathe and Gina. I'm excited to get working on them! 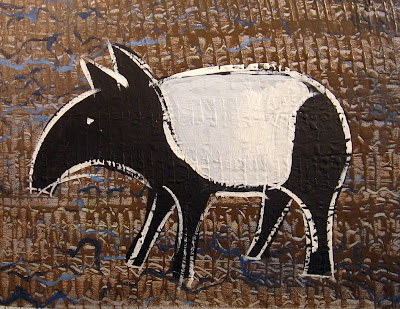 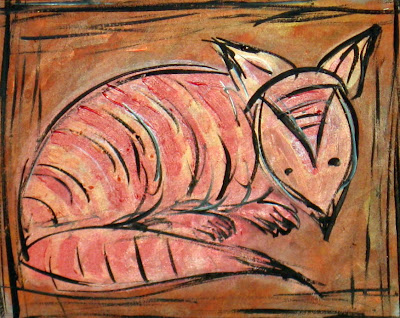 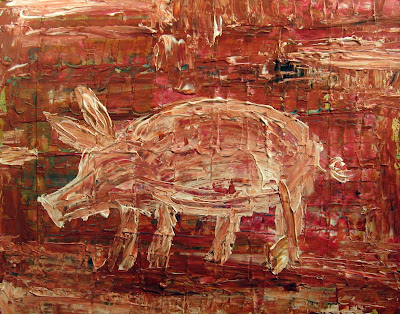 These are all 16" x 20" acrylic on canvas. I like paintings with thick, textural brush and knife strokes. When they are hung on a wall, they can seem to be almost alive. They change as the highlights and shadows move depending the light source and the angle at which the painting is viewed.
There are at least two creepy stories about paintings coming to life. "The Road Virus Heads North" by Stephen King is about a writer (in a Stephen King story...no way!) who buys a painting at a yard sale. The figure in the painting seems to slowly turn towards him and he doesn't look friendly!
"The Road Virus..." is not too subtly inspired by M.R. James' "The Mezzotint". Here's a link to Librivox's mp3 recordings of M. R. James' Ghost Stories of an Antiquary which includes "The Mezzotint". All of these stories are great and Peter Yearsley is probably the best reader over there. If you haven't had a chance to explore public domain literature, I recommend checking out Librivox.org. Lot's of good stuff for free.
2 comments:

W is for Walrus 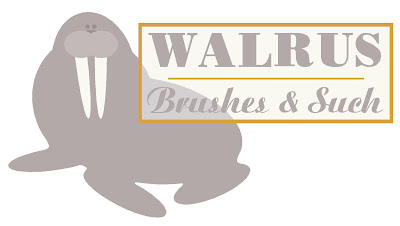 Here is the first suggested animal logo. Dale, I know you were thinking "combs & such" , but I like how "Walrus Brushes and Such" sounds. I will send you your bill and good luck with the business.


Any other requests out there? 19 letters to go!

These are the letters that are done:
Please leave any animal company suggestions in the comments after this post.
Thanks, Dale.
4 comments: 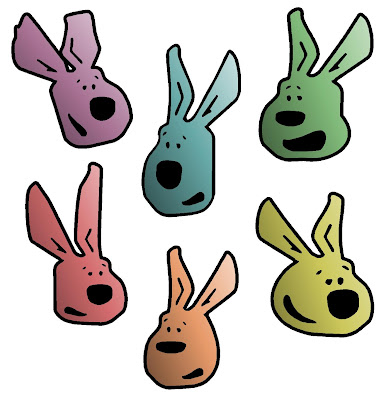 My daughter and I were playing Connect Four yesterday afternoon. She was about to drop one of her pieces when I told her that I saw a spot where she could win. She examined the board, but couldn't find the spot.
I said "Look closely."
She got right down on her hands and knees and put her face about two inches from the game. She didn't understand why I was laughing.
There's not a whole lot of edgy or sophisticated humor in our house, but there is plenty of genuine laughter.
No comments: 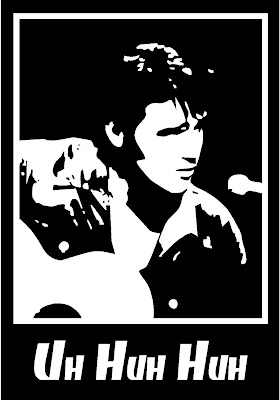 I've been called out. Yes, I forgot today is Elvis' 75th birthday. Elvis ranks very high on my list of cool people. Sorry for the oversight.
1 comment:

Stepped On By A Dinosaur 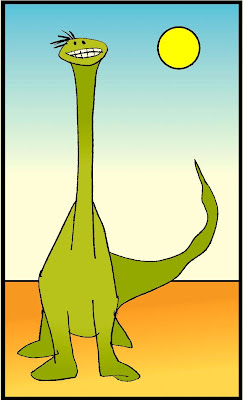 This is a picture of me that was taken in the mid-Jurassic period. I'm under Patrick's back left foot. Man, I'm a geek... Why are you reading this?
2 comments:

S is for Sheep

Sleepy Sheep is the best sleep/energy pill available. Get stuff done while you sleep and then go insane.

B is for Bug

Yummy Bugs: available in original Citrus and new Tropical!
Yes, I'm using a generic animal term for this logo (bug). I could have used "beetle", I suppose, but that's generic as well. Whoa! This thing just blew wide open, folks! You can leave your suggestions for fake animal companies in the comments below. Letters A,B,G,P, and T are done. I'm working on a suggestion that I received for the letter W. Dale, I know the anticipation must be driving you crazy. It's coming!
No comments: 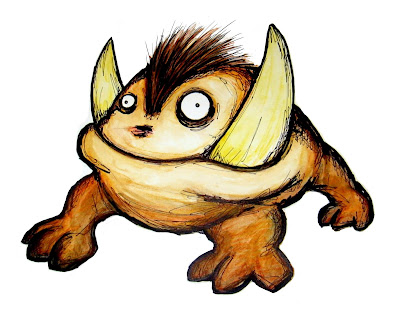 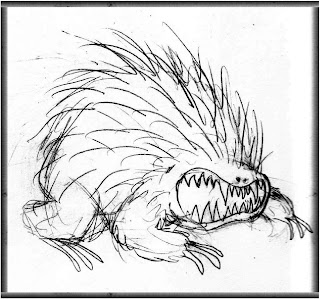 My Lucky Life, Thanks to My Wife

Today is my wife's birthday. She doesn't love horror and cartoons as much as I do, but I love her anyway. Very, very much. Occasionally I try to make pieces for her that are not too monstrous or cartoony to show my appreciation for her love and support over the years.

I printed and framed the piece above for her Christmas present this year. It was created by finding parts from my abstract paintings that looked like the letters L,O,V, and E. I used it on her Christmas card as well. 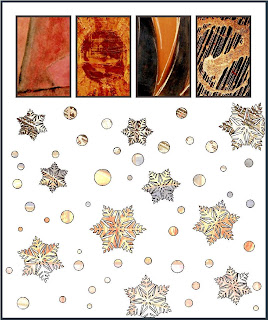 Below are some designs that I came up with for our wedding (invites, programs, thank- you cards). We used the one in the lower right. That was almost six years ago! Time flies. 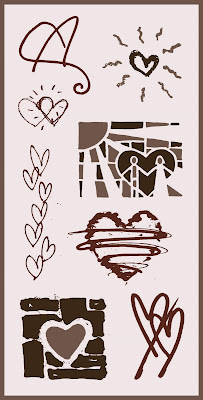 I have some big goals for this year. Lots of hard work (and frustration, I'm sure) ahead. I'm thankful to have my wife by my side. I know how lucky I am.