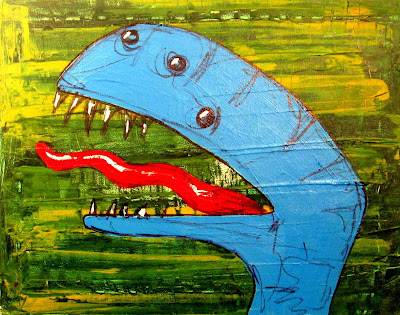 Echo Lizard
The echo lizard lives on the sandy green beaches of the Beant Islands. This man-sized lizard walks upright as it scans the coastline for beachfish, it's favorite meal. When it spots a beachfish basking in the sun or cooling in a tide pool, the echo lizard emits an intense series of squeaks and clicks. It focuses the sounds into powerful "echowaves" by wiggling it's tongue towards it's intended meal. When a beachfish is hit by an "echowave", it is temporarily stunned and becomes easy prey for the echo lizard.
The Forgotten Wildlife is an idea that has been with me for over a decade. I have hundreds of creature sketches and concepts. I'm not exactly sure what to do with them, but they are constantly on my mind. Any ideas or suggestions for these guys would be greatly appreciated. 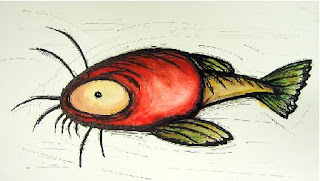 A huge influence on The Forgotten Wildlife are the dozens of excellent nature programs by David Attenborough. His take on the natural world is fascinating, informative, and entertaining. He is one example to prove that television is more than just a vast wasteland for the mind.

This clip is a nice overview of his career but I suggest digging around youtube and/or Netflix, which streams most of his specials. Great Stuff! (The theme for Jurassisc Park is playing on this clip. David is the brother of director and actor Richard Attenborough, who played John Hammond in that film.) http://www.youtube.com/watch?v=DHc8ATrA4oQ
Another influence on The Forgotten Wildlife are the Walking with... specials. This is one of the cheesier clips where Nigel Marvin "travels back in time" to "research" prehistoric animals face to face. Still great, though. http://www.youtube.com/watch?v=1ZtlHvhAqho